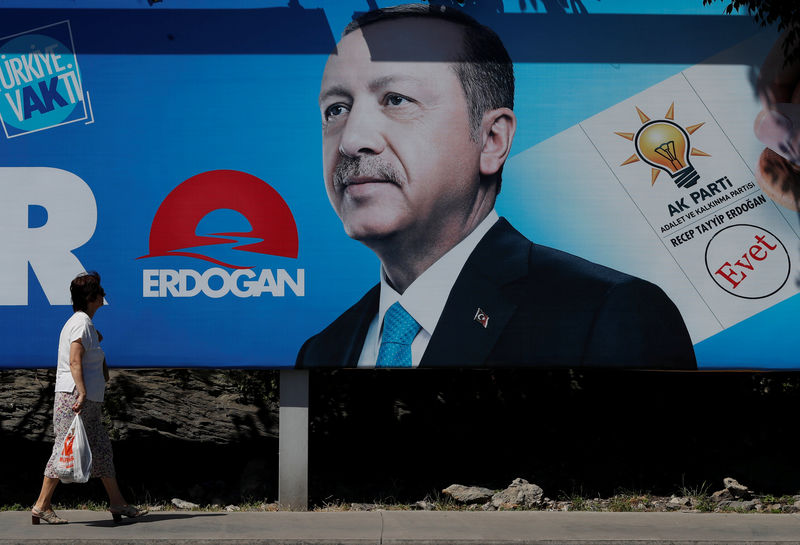 ISTANBUL (Reuters) – Turkish President Tayyip Erdogan has threatened to accomplish this against Moody's after June 24 elections, his latest broadside against credit ratings agencies that they says attempt to lower the economy.

Erdogan, a self-described "enemy appealing rates", has long cast chronic weakness in the lira currency for the reason that work of Western powers going to weaken his government. He has got ascribed the sell-off to the shadowy "apr lobby" and has repeatedly singled out Moody's, Standard & Poor's and Fitch regarding their criticism of Turkey's economy.

All three agencies rate Turkey's debt as "junk", or non-investment grade, and now have highlighted concern about the economical outlook given rising authoritarianism and Erdogan's drive for lower home interest rates.

"God willing, after June 24 we’re going to mount an action with that Moody's," Erdogan said during an interview with private broadcaster 24 TV late on Wednesday.

"They create unusual statements despite the fact that we’re not part of Moody's… You're a good in these a significant position therefore you take the appropriate measures saying 'How do I stain Turkey? How do I insert them in a difficult position?' They do not succeed."

Erdogan could not elaborate about the nature from the potential action, but his comment that Turkey was not a "member" of Moody's suggested he are referring to a different agency altogether, Standard & Poor's.

Turkey solicits ratings from Moody's and Fitch. Its rating from S&P is unsolicited. Therefore if international funds require two ratings to fund a country's debt, investor sentiment would be impacted if Turkey would drop Moody's.

"Investors rely upon these agencies to produce their investment decisions," said Tim Ash, a strategist at BlueBay Asset Management on Twitter. "Cancelling it to one shows that so many foreign funds will not be able to invest in Turkey. Total disaster if happens…"

The lira was slightly firmer at the time at 4.6300 on the dollar at 1256 GMT, as investors appeared to shrug from the comments.

Moody's a couple weeks ago downgraded and placed on review for even more downgrade the ratings of 17 Turkish banks. It said the downgrades reflected its view that "the operating environment in Turkey has deteriorated, with negative implications for the institutions' funding profiles".

The lira has fallen some 18 percent this year, hitting several record lows and forcing the central bank to aggressively hike rates to cease the sell-off.